A love letter from Emerson to Jean. 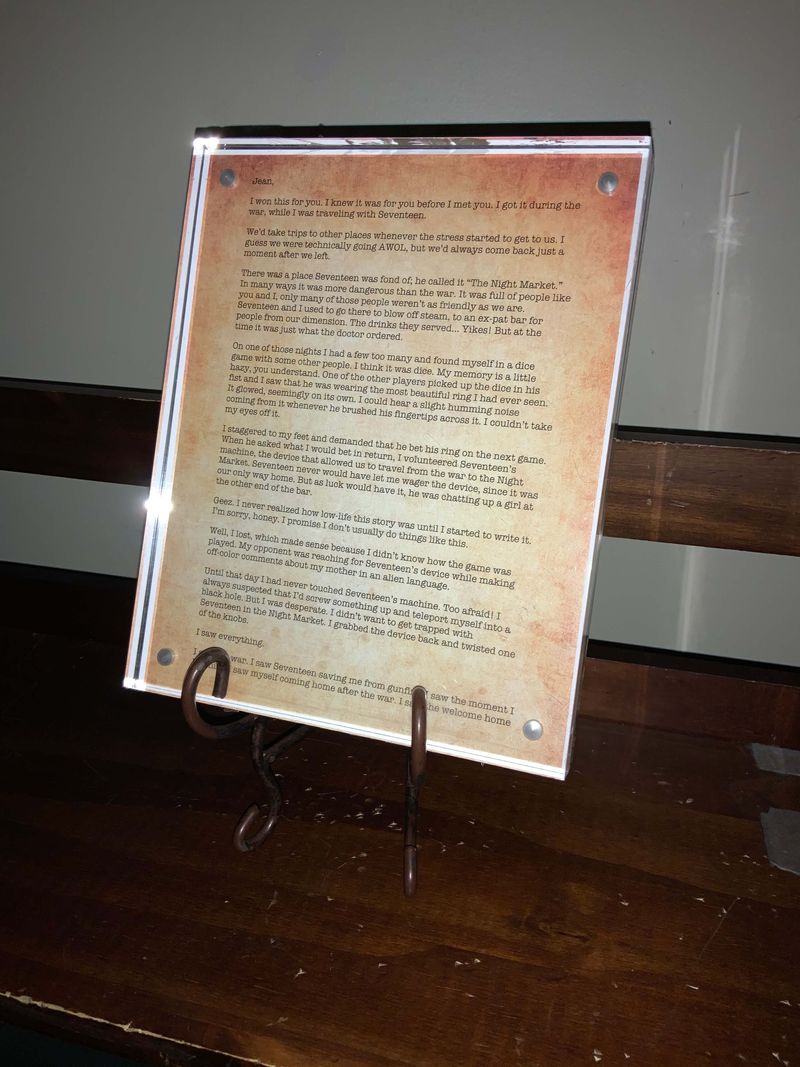 I won this for you. I knew it was for you before I met you. I got it during the war. While I was traveling with Seventeen.

We’d take trips to other places whenever the stress started to get to us. I guess we were technically going AWOL, but we’d always come back just a moment after we left.

There was a place Seventeen was fond of; he called it “The Night Market.” In many ways it was more dangerous than the war. It was full of people like you and I, only many of those people weren’t as friendly as we are. Seventeen and I used to go there to blow off steam, to an ex-pat bar for people from our dimension. The drinks they served... Yikes! But at the time it was just what the doctor ordered.

On one of those nights I had a few too many and found myself in a dice game with some other people. I think it was dice. My memory is a little hazy, you understand. One of the other players picked up the dice in his fist and I saw that he was wearing the most beautiful ring I had ever seen. It glowed, seemingly on its own. I could hear a slight humming noise coming from it whenever he brushed his fingertips across it. I couldn’t take my eyes off it.

I staggered to my feet and demanded that he bet his ring on the next game. When he asked what I would bet in return, I volunteered Seventeen’s machine, the device that allowed us to travel from the war to the Night Market. Seventeen never would have let me wager the device, since it was our only way home. But as luck would have it, he was chatting up a girl at the other end of the bar.

Geez. I never realized how low-life this story was until I started to write it. I’m sorry, honey. I promise I don’t usually do things like this.

Well, I lost, which made sense because I didn’t know how the game was played. My opponent was reaching for Seventeen’s device while making off-color comments about my mother in an alien language.

Until that day I had never touched Seventeen’s machine. Too afraid! I always suspected that I’d screw something up and teleport myself into a black hole. But I was desperate. I didn’t want to get trapped with Seventeen in the Night Market. I grabbed the device back and twisted one of the knobs.

I saw you walking out of your shop, asking me to turn down the racket from the radio I was working on. I saw myself pacing outside of your store, trying to work up the courage to ask you on a date. I saw myself dropping my fork to the floor of the restaurant that night and pulling the tablecloth off the table when I went to grab it. I saw you laughing at me. I saw you smiling at me through your window as you turned out the lights. I saw myself doing absurd little dances in my workshop when I called you the next day and you agreed to go out with me again. I saw us driving across the desert in a van with your head resting on my shoulder. I saw you cross the threshold to our house and squeeze your arms to your chest, as though our home were welcoming you with a hug. I saw you singing while you painted on our porch. I saw you setting a flower in your hair, the first one that bloomed outside our house that spring. I saw you hiding a smirk when you casually mentioned, as though it were the most mundane thing in the world, that I’d need to make room in my study for a couple cribs...

When I came back the entire bar was staring at me. It took me a moment to clear the ringing from my ears. The bouncer had my opponent by the shoulder and asked me if he was giving me any trouble.

“He is,” I told the bouncer. “That’s my wife’s ring he’s wearing.”Maybe that was underhanded of me, but I know relationships that have started from worse. I would love for you to have this ring, Jean, to keep it with you always. If we’re together our lives won’t be confined to Mendocino. We will live across time, across galaxies, on hundreds of worlds that don’t even have names yet. We will make our joy together and our children will inherit something more complex and beautiful than we could ever imagine.

Jean, will you marry me?