The local newspaper recorded strange events on the night of the incident. 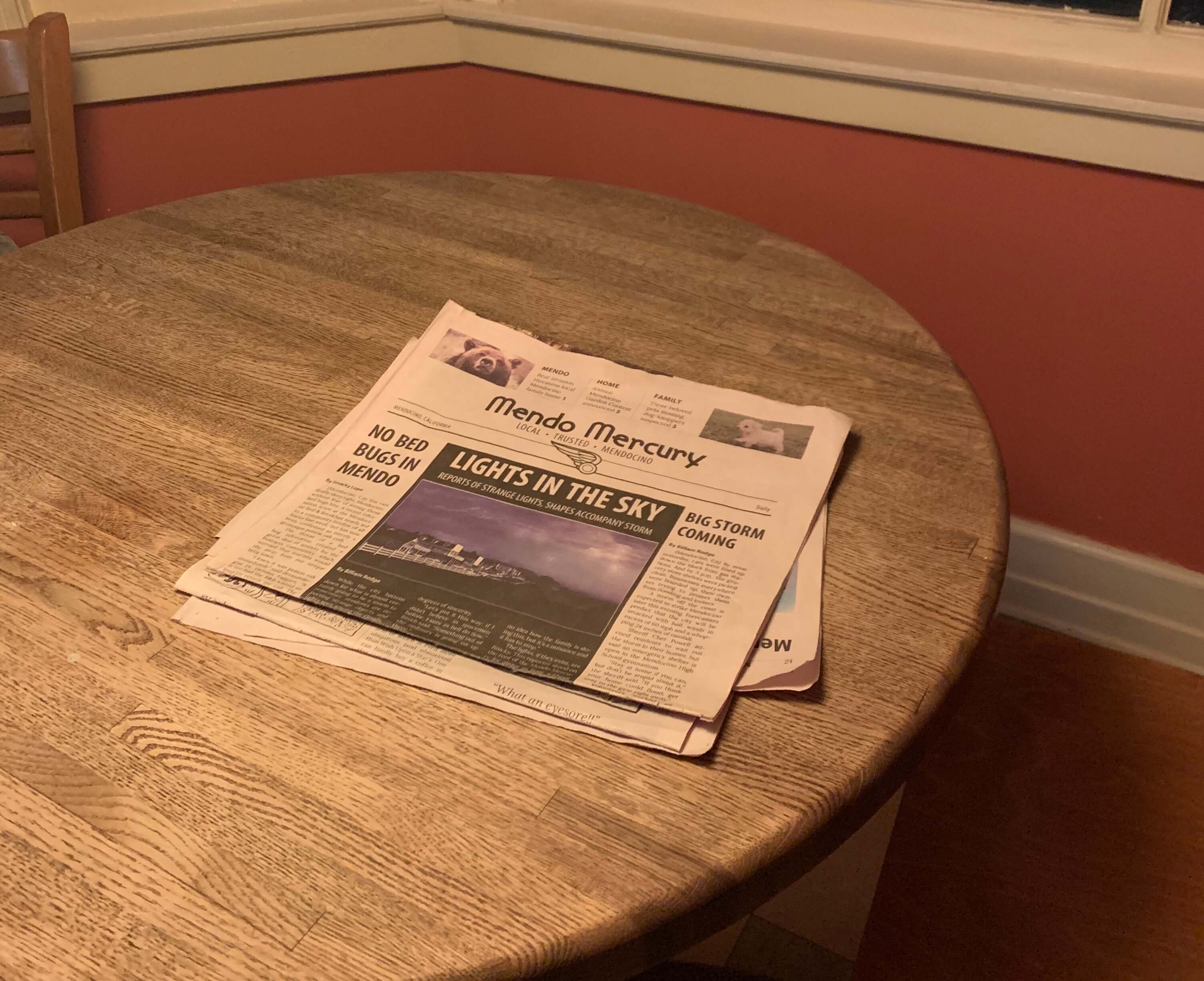 Lights in the Sky

While the city battens down for what is almost certainly going to be a storm to remember, residents are reporting strange objects and lights seen among the clouds.

“I’ve never seen anything like it in my 72 years on this planet,” said Wyatt Smith. “I’ve seen strange things happen during storms, the light changes to orange or to green. I’ve never seen the sky turn purple before.”

Residents have been calling the 911 center to report the strange sightings. Some say the clouds have been taking on unnatural, even neon, hues. Others report seeing dark shapes floating between the clouds. The occasional report notes the presence of an otherworldly humming sound.

When asked what they think the cause of the lights are, many residents responded with “aliens” with varying degrees of sincerity.

“Let’s put it this way: if I didn’t believe in spacemen before, I sure as hell do now,” Smith said. “Something out of the ordinary is going on up there.”

A friend of Smith’s interjected, saying that the lights weren’t coming from the sky, but rather they appeared to be originating from inside a home in the city.

“I won’t say who they are, because I don’t want them to come after me,” the anonymous source said. “But there’s all sorts of lights and noises coming out of that house. That family is crazy. I keep calling the cops but they refuse to do anything about them.”

She said the odd noises have kept her awake at night and have even caused her to hallucinate.

“I keep dreaming about the little boy who used to live in that house,” she said. “I have no idea how the family is doing this, but it’s a nuisance and it has to stop.”

The lights, if they exist, are finicky. This reporter stood on the roof of the Mendo Mercury for about an hour without seeing anything unusual.

Sheriff Chet Powell, who is organizing emergency efforts prior to the storm touching down on the coast, says he doesn’t have time to talk about “ghost stories.” He said all first responders are on edge about the approaching storm.

He noted that he had arrived at the regional 911 center yesterday afternoon with a stack of large pizzas, a gift to emergency responders who are on red alert in the wake of the impending storm.

“Do you want to help me lay sandbags or are you going to stand there wasting my time?” Powell asked this reporter.

Sheriff: Reports of Strange Visitors May be Hoax

Powell made his comments Tuesday, after the 911 center had been pummeled with reports that strange, government-like agents had been harassing Mendocino area residents. The alleged agency, which calls itself The Charter, according to the callers, has been reportedly spying on people. Callers sometimes claim the agents force their way into homes and interrogate people before mysteriously vanishing.

“We’ve looked into it and no such agency exists,” Powell told reporters. “We’ve asked everyone we could think of in both the state and federal governments and they all say the same thing: there is no such thing called The Charter.”

The sheriff said that his detectives combed the greater Mendocino area and have found no evidence of the strange visitors, who are often described wearing dark spacesuits and who talk with flat, monotone voices.

Powell believes that reports of the mysterious organization are the result of an Internet hoax.

“I’m not that old,” Powell, 56, said. “I know what kids get up to on the Internet. Have you heard of this Slender Man thing? I imagine it’s a lot of fun for the people who make these calls, but that’s no excuse to put people’s lives at risk by tying up our 911 operators with stupid stories.”

It is a felony to make false reports to 911, Powell said.

Many of the reports seem to involve one family from Mendocino. The Charter agents are said to interrogate local residents about the family in question. Powell would not release the family’s name because they have not been charged with a crime.

“Listen, we talked to the family and they’re as confused as we are,” Powell said. “They haven’t done anything wrong. They’re a little strange, sure, but they’re good people and they don’t deserve this kind of abuse.”

The Mendo Mercury used 911 records to contact some of the callers who have reported The Charter. One man, who asked to remain anonymous, said he took offense at Powell’s remarks. He said he was afraid for his life after two strange individuals apparently broke into his south side apartment.

“They kept asking about this family, if I knew them, if I could tell them anything about them. It was creepy! The entire time they stood in my way so I couldn’t get out of the apartment. I thought I was being robbed or arrested or worse!”

The man also reported that a strange humming sound accompanied the visitors. He said it gave him a headache.

“I know that sounds crazy, but it happened,” he said.

The man said that the agents left as strangely as they arrived.

“The humming sound got so loud that it hurt. I cringed and covered my ears and when I looked up they weren’t there anymore,” he said.

The man criticized the sheriff’s remarks. He accused Powell of spreading “disinformation” about The Charter.

“Is Sheriff Chet Powell in cahoots with these monsters?” the man asked.

Barbara Ott, a professor of religion and folklore at San Francisco State University said that she thought the calls were an “urban myth in action.” She said that the story possibly had roots in the alien and conspiracy theory communities.

“Stories of the so-called ‘Men in Black’ are much older than the movie with Will Smith and Tommy Lee Jones,” she said. “This is an enduring American legend about government agents who harass people who witnessed supernatural events.”

One of the earliest stories about Men in Black dates back to 1947 when UFOologist Harold Dahl claimed that a man in a dark suit pressured him to not talk about his alleged UFO sightings, Ott said.

“This is pretty standard folk-spirituality,” Ott said. “Fears of some vaguely-defined Other who has a physical form and exists only to wreak havoc on one’s community. There’s no need to take these stories seriously. That’s how witch hunts get started.

Bill and Georgia Hayes are enjoying an all-expenses paid vacation to an unknown destination, courtesy of the well-meaning people who donated to their sham Wish Upon a Star! Foundation. Federal prosecutors accuse the couple of embezzling close to $5 million from the organization and fleeing the country. That money, it pains us to say, was intended for cancer research.

Their very prominent (some would say obnoxious) social media campaign sold property rights to stars and planets. By donating to cancer research, people could own their own alien world, complete with a “deed” issued by the foundation. Donors would then post the deed to their Facebook profiles.

The campaign spread like a virus, with some kindhearted (but foolish) donors becoming emperors or empresses of whole star systems. The campaign overstayed its welcome quickly. Perhaps some of the more cynical people in our community are smirking now that it’s been revealed as a scam.

As our reporters pore over the monstrous 200-page federal indictment against Bill and Georgia Hayes they notice that a certain organization appears again and again: The Power of Positive Mechanics. Positive Mechanics is a “self help” religion, the marketing arm of which is even more ubiquitous (and obnoxious) than Wish Upon a Star’s. One can hardly buy a coffee in this community without one of its followers bothering you for a donation while waving a pamphlet under your nose.

This does not include the voluminous one-time donations Bill Hayes made to the church. Bill’s connection to the inner circle of Positive Mechanics is undeniable. Until the time of his indictment, the church had a picture of Bill Hayes shaking hands with Selig on their website. Selig stated of Bill Hayes: “He is a divine being who, thanks to the teachings of Master Lucius Selig, manifested enormous wealth and generously shares it with Positive Mechanics.”

Selig declined to discuss the Hayes case with our reporters.

What else did you teach Bill Hayes, “Master” Lucius Selig? Did you teach him how to steal millions of dollars from people who wanted to help fight cancer? Do you know where he and Georgia are hiding right now? Speak up, Selig! We demand that federal agents investigate you and your “church” to the fullest extent possible.

Lex Selig, just 10, passed away Tuesday of an un- determined illness. Lex was born in Mendocino and lived here all his life. He was surrounded by his family when he stepped into the unknown, the fog space, the space between worlds. He is survived by his mother and father, Nicolae Selig and Piper Pastore, and his twin sister, Morgan Selig. Services held privately.