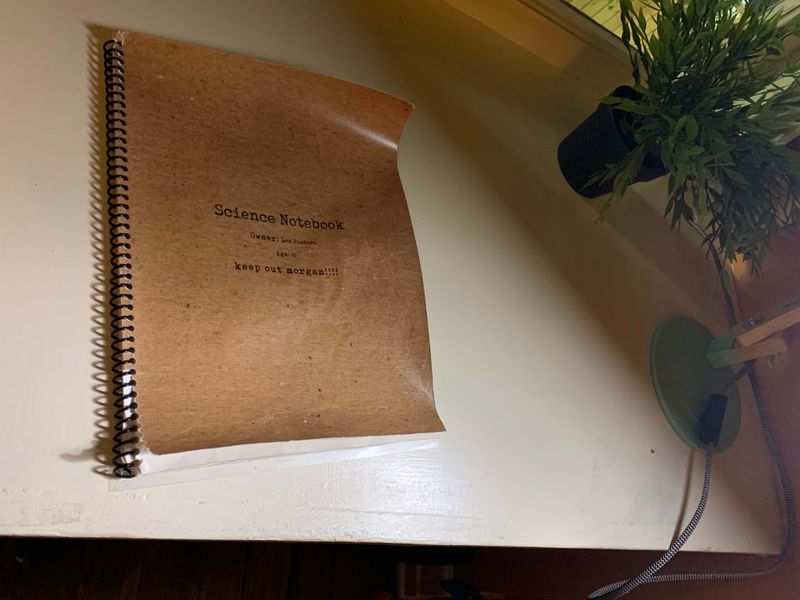 All relationships die. Either over time or because of time, they all fall apart.

Nimsesku, my hamster, cannot die. He falls down stairs, gets lost for weeks, or ends up in the dryer, but he always comes back. Granddad said Nimsesku is more than 40 years old. I think Nimsesku knows how to beat Death and Time. I will learn his secret and use it to save Morgan and me.

It is not that Nimsesku cannot die; it is that he will not die. Time only hurts those who have no willpower. If you want to remain the same and if you refuse to move, time cannot touch you. I made a maze to test Nimsesku’s will to survive.

Nimsesku never completed the maze. At most he made it three rooms in and started to clean himself. Morgan saw me experimenting on Nimsesku and said it was wrong. She started to yell for mom and would not stop until I put Nimsesku away.

It takes a lot of energy to stand still in Time. By harnessing this energy we can make pills to keep us young forever.

I put Spring inside a fish tank — plants from Morgan, flowers, rainwater and sunlight. I made a special and super-awesome machine all by myself called AN ATOMIZER. It looks like a typewriter with hair. All of the “hairs” (energy cables) will break down the Spring inside my terrarium and put it into a single pill, a concentration of Life and Warmth that looks like a rock candy. I will feed this to Nimsesku and see what happens.

Morgan would not let me feed the concentrated Spring to Nimsesku. She said it was cruel. She grabbed it from my hand and swallowed it herself. I warned her that she could get hurt or throw up but she did not listen. I will watch her and see what happens.

Morgan is fine. She said the concentrated Spring made it easier for her to talk to plants. She brought home a flower named Jean that she always talks to. How stupid! Who cares what a dumb plant has to say?

Nimsesku cannot die because he is more machine than hamster. Engineered machines resist Time better than uglyweak bodies. I know Nimsesku is full of wires and metal. I will find out how he is built and I will make BETTER bodies for myself and Morgan.

Morgan took Nimsesku away before I finished testing Nim’s magnetism. She was crying. She said she hates me so much that she won’t tell mom because she doesn’t want mom to feel how she feels. Nimsesku, Plant-Jean and Morgan are all hiding under the stairs and they won’t come out.

I was too late. Time ended my relationship with Morgan faster than I thought it would. She doesn’t want to be my friend any more. She can keep the stupid hamster. Nimsesku wasn’t much help anyway.

Uncle Lucius told me he knows why Nimsesku does not die. He knows why Nimsesku stands still in Time. The reason is Sonic Energy. Granddad’s old satellite dish-thing was the machine that did it. By using a special kind of music, Granddad was able to bring Nimsesku back to life when he died once in 1987. Granddad always says, “Sound is the key to the Universe” and now I know why.

I am studying Granddad’s notes. Lucius borrowed them from the safe in the office. When Granddad brought back Nimsesku in 1987, Lucius got in the way and was hit by the sonic energy. Because of that, Lucius was able to do amazing things. He said his powers were taken away from him, but with my help Granddad's machine will recharge him.

Lucius says if I help him understand this machine, I can use it on him, then on my sister and me. Morgan and I will be friends again and stay friends forever.

The Transducer hurt my ears when I tried using it on Lucius. Lucius said it was working, but the effect didn’t last long enough. Lucius cannot get his gifts back. He never will. That part of him is gone like Grandma. Sorry, Uncle Lucius.

I feel sick. I still hear the noise even though the machine is off and even though I put earmuffs over my ears. Morgan knows something is wrong. She is telling on me. She always tattles on me. I feel sick.

I failed. The room looks foggy. The whole house looks foggy and it is hard to see. I feel sick. I can hear dad’s laser harp, which is nice. Anything that doesn’t sound like the Transducer is nice. I thought I heard Grandma as dad played the laser harp. I heard her voice in the quiet parts between the notes. I will rest for a little bit and see if she keeps talking to me.

I miss you, Grandma Jean.