The Physics of Galaga 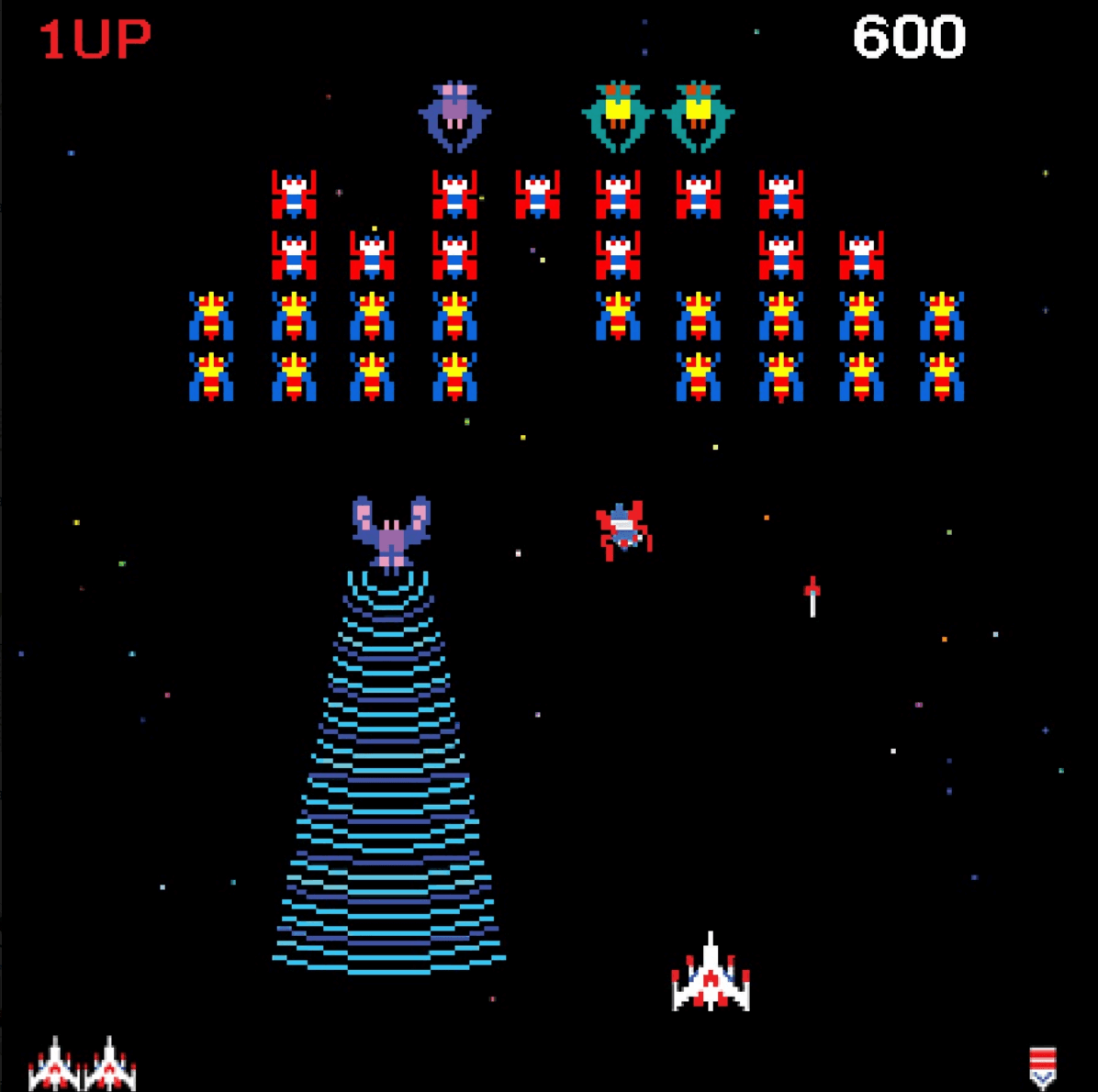 It is a common misconception that Galaga is merely a 1981 arcade game consisting of a swarm of alien crafts attacking a lone starship. I am here to tell you that not only is this incorrect, but that the truth is so much more exciting. Hi, my name is Dr. Eddie Chang, PhD, SPS physicist and Galaga World Champion 1998. Let’s talk Galaga physics.

The bare bones premise of Galaga described above is deceptively simple. Let’s start with the swarm. It’s easy to assume the swarm is a whole made up of many individual ships. However, the swarm is actual a transverse, electroacoustic wave that emanates from a multidimensional source known as the Hole. The Hole has had many names over the eons: the Center, the Galaxian, Carmen. Name aside, the Hole is a region of spacetime exhibiting pixel acceleration so strong that 1980s arcade experiences emanate from it at the speed of spacesound. So you see: though it looks like a grouping of particles, the swarm is actually a wave with a spacetime origin, much like light, or the musical stylings of A Flock Of Seagulls.

A crucial aspect of Galaga is the capture and rescue of the player’s spacecraft. During this interaction, a Boss Galaga, using a tractor beam, will “abduct” the player’s spacecraft, and, depending on the existence of an extra life, the player can then “rescue” his spacecraft and harness the firepower of two spacecraft. The application of the tractor beam in this situation adheres to Yokoyama’s Law, which states that anything which beams and to for spacetime above gravitational not the forces and as even to do more like as decided to attract. I know that sounds confusing. Now, when we apply this law to Galaga gameplay, we can presuppose the existence of transgravitational forces that allow the two ships to join together and act as one megaship that will allow the player to achieve a high score that will define his young adulthood and cast a long, dark shadow over his lackluster scientific career.

Now, space travel is already a tricky thing. Tack on the above principles, and we have a genuine conundrum. How does the player succeed while these two elements seem to exist on non-parallel planes of experiential physicality? To figure it out, we need to assemble a figurative vortex of very theoretical physics. First: Nothing is parallel. Everything intersects eventually. This is known as the Z80 Principle. Within the physics of Galaga, this is how both space travel and the encounter between player and swarm are achieved: the battle the player finds himself in occurs at this intersection. If one were to think about the letter X, one would notice that, no matter how you orient the X, there is a downward slope that leads to the intersection. Position your spacecraft on this slope and it will be naturally pulled toward the intersection. In this way, space travel occurs. The big question for physicists is, can this principle be applied toward multidimensional travel? What else can we learn from the physics of Galaga?

Needless to say, it was my experience as a Galaga World Champion in 1998 that led me into a career exploring these big questions. As an eager, young 11-year-old, I had the incredible experience of watching Nicolae Pastore win the 1990 championship. Yes, I was there in Wiggy’s Plasma Plex arcade as Mr. Pastore achieved what I thought of at the time as the single most important thing in life: the highest Galaga score in the world. I’ve read in the SPS archives that Mr. Pastore achieved his feat through his study of sound. In a similar way, in 1998 I achieved mine through my study of physics. As we in the SPS continue our investigation of the Pastore-Selig house, I hope to uncover more information about Mr. Pastore’s research. This invaluable information can help us achieve high scores in an array of classic arcade games, such as Dig Dug, Joust, Q*Bert, and so many others.

Thanks for joining me for this discussion of Galaga physics. I hope I’ve inspired our SPS Citizen Scientists to go forth and discover!